Pat and Dot live in Mudgee in NSW. Pat has kept and shown fowls since 1939. Over those years they have won thousands of prizes, many hundreds of these being major awards. Pat has judged at 64 Royal Shows in every Australian capital city.

Pat and Dot have kept many breeds, always with the aim of improving each breed and distributing good quality birds to others. At the last Langshan Club of Australia meeting the members voted to dedicate the 2012 show, to Pat and Dot.

We spoke to Dot about their experiences. This is their story.

When did your interest in poultry start?

Out of seven children, Pat was the only one who inherited his father’s love of poultry. Pat’s father had Rhode Island Reds and Columbian Wyandottes. At the age of eight-years, Pat got started in Langshans. Pat first showed his birds at a Sydney Royal in 1951. Before we met, I showed horses. After I met Pat I became involved in showing poultry.

What breeds have you kept?

Over the years we’ve kept many breeds – White Wyandottes, Langshans (Blue, Black and White in large and bantam), Black Rosecombs, Polish, Houdans, White Silkies and Pekins. In Langshans, at first we didn't concentrate on the whites and blues but we became aware that there were very few around. We began focusing on them to keep the breed going and are trying to encourage other people to breed them too.

Motivation isn’t the right word here – with Pat it’s an obsession. He’s always been generous in helping others get started. Ninety per cent of the Langshans in Australia would be derived from our stock. People who breed good fowls and don’t let them go are not doing the breed a favour. Pass on your good fowls, not rubbish. I hope Pat will be remembered for letting good birds go to other breeders.

What are the methods that you use to prepare your birds for a show?

Preparing birds for showing can vary, depending on the breed. All birds, however, need to be pen trained before a show so they will stand quietly to be judged. Some breeds only require very little cooping otherwise they will grow too much comb penned away from the sun. They will also become stale if cooped too long—females in particular.

White fowls should be washed. We clean the headpoints and feet of our birds with a soft brush dipped in water to which a little shampoo has been added. The feathers of the coloured birds are then wiped over with a soft cloth.

Can you tell us about some of your show experiences and successes?

We once put a very good Langshan cockerel in a show at Wellington. There were only four birds in the class and our bird missed out. Pat asked the judge what he didn’t like about the un-carded bird and the judge said “Well, he looks so different to the others!”. That bird went on to win many championships afterwards.

A highlight has been showing under experienced, top judges, like Athol Giles. Also having top judges show under Pat, including Athol Giles who complimented him on his judging afterwards. That was an honour.

We have a huge collection of cards and ribbons. I’ve kept them all. We always keep every card we get. Many of the cards you used to get were beautifully designed.

How have you seen the fancy change over the years?

People used to breed and show big teams. You have to breed a reasonable number of birds to pick out the ones that are appropriate to continue with. There is a trend these days towards breeding a few and showing the best of these, but if you don’t have a lot to choose from your best might not be up to scratch. People need to strive to improve their breeds. It has to be a long term commitment.

Some bantam fowls are too big. We’ve noticed it especially in white Wyandotte bantams. White Wyandottes are getting too Orpington-like, loose in feather and not showing enough leg. Some are a bit beetle browed too.

In 2000, a group of American fanciers came to Australia. They were astounded at how big the bantams were here in both softfeather and hardfeather. Some bantams have become intermediate in size and this trend needs to be reversed.

Where do you see purebred poultry heading in the future

Restrictions on keeping male birds create problems for the fancy. It especially prevents young people from getting started. Two of our grand-daughters are very keen but they live in Sydney and can’t keep male birds. They keep the hens and we keep the males here. We’ve also noticed the local shows struggling to maintain numbers. A lot of people are interested in fowls now, but not so many in making a commitment to breeding and exhibiting.

What’s your advice for a person new to a breed starting out?

Go to a show and see what you like. Then go to a top breeder to get good stock. You don’t need to try to get their best stock. The important thing is that the birds have the good genes behind them. It’s better to get the second best from a top breeder with a long established line than the best birds from a new line that still has a lot of variability in it.

What’s your advice for people starting out in judging?

Judges should be capable of explaining exactly why they chose one bird over another. It’s not enough to say, ‘it looks better’. A judge should be able to give constructive advice and to say why and how they made their decision. Judges should also know the finer points of the breeds they are judging.

Which do you prefer – broodies or incubators?

We use both broodies and incubators for hatching. We specially breed broodies (white Silkie male/white Wyandotte large fowl female cross) and regard them the best. We hatch eggs in incubators, too, however rear all chickens with hens.

What are your tips on feeding?

We feed a lot of grain in preference to layer pellets, and feed a wet mash each morning. Breeder pellets help fertility in the breeding season.

What tips on breeding and showing would you give?

You need to be involved in a breed long-term to build up your knowledge. You need to learn what a bird will pass on. For example, birds with comb faults or split wings should never be bred from. You need to know how even slight faults will be passed on in the breeding pen.

What do you get out of showing?

We get the satisfaction that we are helping the breed. You meet a lot of nice people. Poultry people are a good group of people. 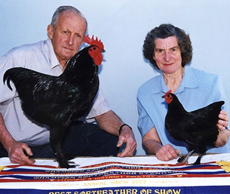 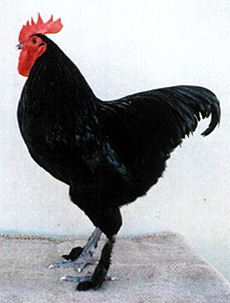 Above: A P&D Birchall Australian Langshan cockerel (photo 1997). This photo is the official logo of the Langshan Club of Australia. 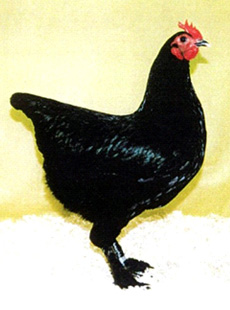