Peter Ubrihien is well-known as a poultry master both here and abroad. He comes from a renowned poultry family with his father, the late Claude, a famous name in poultry breeding. His brother Ray also breeds and shows fowls.

Peter lives on a dairy farm near Bega NSW. This is his story.

When did you first start showing and breeding fowls and how long has the Ubrihien family been keeping poultry?

Dad moved here in 1919 and we have had fowls here since then.

I started when I was about 8-years-old. My brother Dick and I showed under the name of C. Ubrihien and Sons. I had soft feather birds including Buff Pekins, Silkies and Partridge Wyandottes while Dick had the hard feather bantams—Old English Games and Indian Games. Dick got his Indians from a Mrs Doon whose son was a prolific jockey in the district.

Dad wouldn’t let us show in the juniors as he believed there was too much rorting in those sections with people putting in birds just to win a prize. He would mention the fact that people sometimes wheeled prams up to the presentation to accept a prize for the winning junior.

We often showed under different names at the Sydney Royal, because of the alphabetical listings on the entry sheets. It wasn’t unusual for us to have birds in one class under two or three different names so it wasn’t so easy for the judges to work out whose birds were what because ours appeared at the start, middle and end of the list.

Who have been your mentors along the way?

I used to catch the milk truck out to the Jauncey farm and spent a lot of time with him. He really knew how to mate up fowls.

When I got my driver’s licence I would drive Dad up to Athol Giles’ farm and we spent many weekends at his place. One of my favourite momentos is Athol’s imported judging stick which he had sent out from England.

I found Ian Benson a very knowledgeable person and he had a great understanding on all forms of poultry. Les Wilson was another who knew a great deal about poultry.

I had many discussions with Ray Connors over the years mainly in regards to our common interest in Australorps and Barred Rocks.

What breeds have you kept and what are your favourites?

We have kept many breeds over the years including Australorps, Leghorns, Andalusians, Wyandottes, Old English, Spanish, Rhode Island Reds and Plymouth Rocks to name a few. My brother Ray has Langshans, Hamburghs and different coloured Wyandottes amongst his breeds on the farm as well.

When we were younger, Dad would have different breeds stationed out at many farms in the district. It was not unusual to call in and see 30 or so Andalusians at one farm, the same number of Australorps at the next, and so on with different breeds. He would travel around and mate up the birds for them.

My favourites would have to be the Australorps, Barred Rocks and White Leghorns. These are the breeds that I now want to concentrate on.

How many Royal shows have you judged?

I have judged Royal shows in all states except Western Australia. I have also been the specialist judge on many occasions at these shows.

I was very proud to be invited twice to judge in the United States of America. Both shows were in Oregon and I was asked to judge Rhode Island Reds, Wyandottes, Barred Rocks, and Leghorns.

I saw some lovely Silver Laced Wyandotte bantams that I would have loved to sneak into my suitcase!

They have a very good system for juniors at these shows. The junior must be present and available to answer questions from the judge about their fowls or the breed in general. If the junior is not present their birds are not judged.

What tips on breeding and showing would you give?

With breeding I line breed and stick to it. If I have to bring in a bird I try to bring in a female—that way you can carry on with your other females and always have a fall-back option.

I can remember when Dad used to put some of his breeding pens together and people would question why he had such-and-such bird in the pen. His response was always: ‘don’t judge them here, judge them at the show’.

I think we have lost a lot of the knowledge of the old breeders. They knew what fowls to put together and what the results would be. Today, people talk and read a lot about genetics and how they should be applied, but many of the old breeders were able to get much better results. Another of Dad’s sayings was: ‘what he knows is what he shows’.

With show preparation, the main thing is to spend time with your birds. Get them quiet and used to being handled. Make sure they are cleaned up and ready for the show, and don’t be afraid to learn from others.

Is it true that the Australorp pullet pictured in the Australian Poultry Standard was your father’s and the cockerel was Jimmy O’Malley’s?

Yes, that’s true. I can remember Dad talking about the photos and the artists touching them up in 1949, to get to the agreed standard.

What are your thoughts on the Australian Poultry Standard and have you been involved in the development?

I think the poultry standard does its job. I have not been involved much—just a couple of conversations about leg colour in Plymouth Rocks.

I hope the standards are not changed to suit what is being bred at present. They should describe what we ought to be trying to breed to—not the other way around.

Tell us about some of your show successes.

I've showed successfully at the Sydney Royal over many years and did well at the Poultry Congress in 1966.

I get a big kick out of doing well at our local Bega club show where there is a very good standard of birds present.

How do you hatch and rear your fowls?

I used to use an incubator, but now I only use broodies, because I don’t hatch as many chickens these days. I used to use crossbred Wyandottes as broodies, but have found the Australorp bantams are great and I can show them as well.

Feeding your fowls, can you give us some advice?

I do the usual things—start them off with a good quality starter crumble and progress to scratch mix. They get fresh shell grit and free range most of the time with plenty of green pickings. It’s important to make sure you always feed your fowls well.

Luckily here, when the grasshoppers are about we hardly have to feed them at all!

What are your concerns about purebred poultry in the future?

I’m mainly worried about how we are going to sustain our stock. Council by-laws about keeping roosters are a big problem. New people move into town and complain about a rooster crowing but put up with a barking dog. What is the difference?

I know that you are very generous with people starting out with poultry. What advice can you give about obtaining stock?

Always go to a well known breeder or make enquiries at your local poultry club. 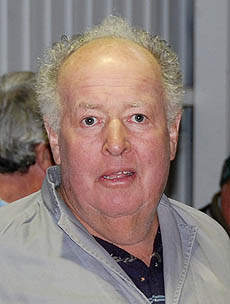 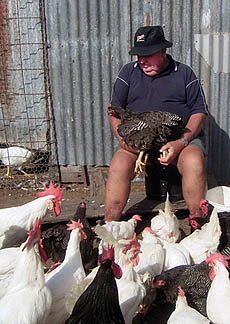 Above: Peter surveys his empire. 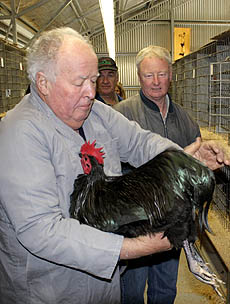 Above: Peter Ubrihien doing what he does best. Judging at our annual show in 2010. 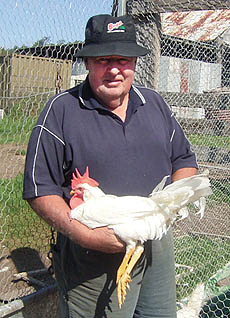 Above: One of Peter's favourite breeds... white Leghorns. 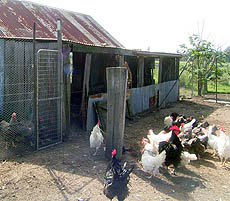 Above: A mixed flock foraging in Peter's yard.